Welcome to our News page. Here is the latest of interest to our Alumni:

You're invited to a Mini-Reunion May 14-16, 2010. Details are in the link below. If you cannot open the powerpoint slide, please write to Noh at nohkiko@aol.com. Save The Date Powerpoint 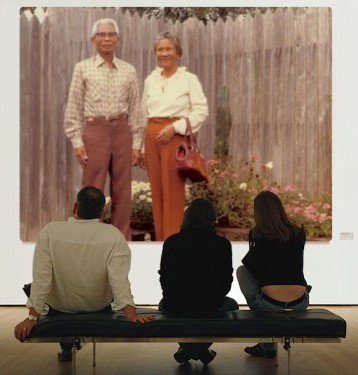 July 4 2009 (click photo for Bro. Kevin's album)
To Notre Dame Alumni Association members who generously donated to the Tio Doroy Library (TD Learning Center) here's an update photo news from Bro. Kevin O'Niell who recently visited the library June, 2009. As you can see, your donation is being put into good use. Edna Aquino Balili is collecting used books in the West Coast and recently sent a boxful. Nena Adonay and Prima Hower are also sending an average of a box per month. We now have a good process in place for acknowledging your donations. If you wish to collect used children's books, or want to donate towards the shipping cost, please contact Prima Hower. All donations are tax deductions through the Marist Brothers Foundation. Thank you very much.

The NDDU Elementary Department was moved from the Dadiangas campus to the Lagao campus a year or two ago. I love watching the students in Pre-K and K. They are a delight.

A special note about "Tio Doroy's Library". Prima Guipo Hower, the Guipo family and friends have set out to honor their dad who was a teacher for many years. Over the past couple of years they have collected books for the library and had them shipped to the Philippines. You can see that their efforts have not been in vain from the few photos I have included here.

Note: "Tio Doroy's Library" referred to above by Bro. Kevin is located inside the TD Learning Center, named after Trinidad and Doroteo Guipo who collectively taught for 75 years as Public School teachers; 40 years for Ma'am Guipo and 35 years for Sir Guipo. If you wish to donate used books or financial aid to the library, please contact Prima Hower at primahower@gmail.com or Edna Balili.

June 30 2009
T-shirts from the 2009 reunion are available from Gerry Hingco. He has 25 pcs of large and 30 pcs of extra large. The price is $12.00 including shipping and handling for US and CANADA residents. Please send checks made out to "Notre Dame Gensan Southern California Chapter" and mail them to 2917 Brunswick circle, Corona, CA 92879.

June 27 2009
Reunion 2009 has concluded, and the venue for Reunion June 23-26, 2011 is the great East Coast State of Virginia! Please give the webbist a few days to start getting pictures up. If you have pictures you'd like to share, please email chris@notredamegensan.org. You can send the pictures themselves, or send a URL to an online service (such as Multiply, Flikr, etc.) where you have uploaded them. Keep in mind that if you send a URL to an online service, be sure to make your pictures available to the general public. Note also that if your service requires you to create an account to view pictures there, your site may not be visited due to "Account Accumulation Fatigue".

June 13 2009
The date is nearly upon us for our 2009 Biennial Reunion! Please check out who's coming and what they'll be doing!

July 2008
Join the Southern California Chapter for their 4th annual Notre Dame Day picnic/camping on Sept. 5-7 '08, this time to be held at Campland on the Bay in Mission Bay, San Diego. Website is www.campland.com You ONLY have up to this week to submit your names to Elena Gonzalez for the campsite reservation. Her e-mail is elena.tingzon@gmail.com, cp is 619 997-5528. Please also see the Event Activities.

Note also that the North-West chapter is holding a Napa Valley Get Away Weekend October 25 - 26, 2008 in (where else?) Napa Valley, Ca. For more info, please visit their Tour Activities.

May 2008
The Mabuhay News covered our 2007 reunion in Vancouver Canada in their July 9-29 2007 issue. Click the image to see the article. Thanks go to President Ding Mateo who supplied your humble webbist with a copy of the newspaper during his recent trip to San Francisco.


February 2008
Minda Zamzam has provided us with photos from the So. Ca summer picnic 2007 and christmas party 2007. You can view them at http://picasaweb.google.com/dafiliptian/NDPicnicChristmas. Thank you Minda, and congratulations to the Southern California chapter! 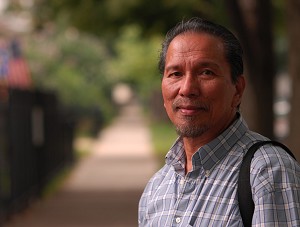 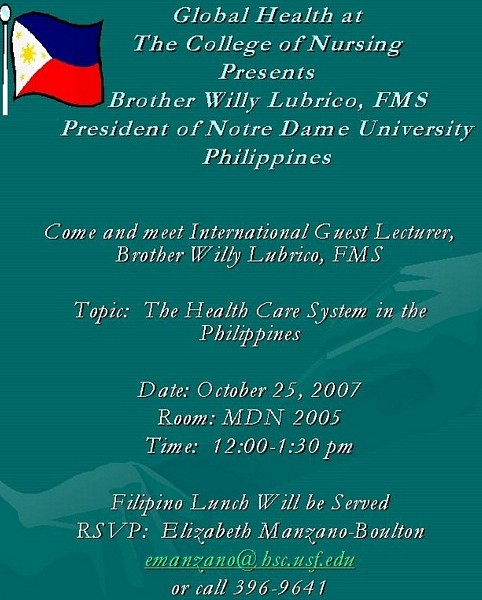 Prima Guipo Hower reports: "We are hoping to start an exchange program (students and professors) with Notre Dame Universities in the Philippines" via the vehicle of global health. 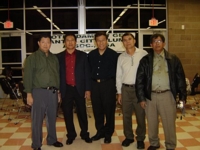 December 2006
The Southern Ca Local Chapter held its Christmas 2006 party. Click on the photo to go to the photos from the party.

November 2006
Our kind web hosts at jswd.com found that the old guestbook was prone to mischief by bad guys. So as of this month they have replaced the old guesbook with a new version which will improve our lives in several ways. First, you won't have to wait to see the results of your entry. Second, it will make my life a bit easier when I have to delete messages. Your webbist, Chris G.

October 2006
The 2nd annual Notre Dame Day picnic of the Southern Ca Local Chapter was held Saturday 09/09/06 and very well attended. Congratulations Damians! Click on the photo to go to the photos from the picnic.

April 2006
We're proud to announce the opening of the TD Library website. This site supports the project to build a children's library located at Lagao campus of Notre Dame of Dadiangas College, General Santos. Please visit this site to learn more about this wonderful project!

March 2006
Come see how many people are visiting our site! This graphic lists the number of visitors. Click it to see the details. It's interesting to see that our visits are growing so strongly, more than triple what they were just a year ago. Thanks for visiting!

February 23, 2006
BORN to Ben and Trey Hoyumpa (Ben is the son of alumnus Dr. Anastacio Hoyumpa and his wife Joan), Christopher Parker Hoyumpa. Congratulations to the proud parents and grandparents!

June 2005
The 2005 reunion in Orlando is complete, and the next venu in 2007 is Vancouver British Columbia, Canada! See you there.

April 2003
Dr. Hoyumpa in Bosnia. Our esteemed alumnus Dr. Anastacio Hoyumpa has been traveling the world, including a trip to Bosnia. You can see more photos at http://hoyumpavision.com/album/tash/tash.html.

AWARD WINNING ARTIST BUENO SILVA DONATES PORTRAIT OF GEN. PAULINO SANTOS Our very own Notre Dame Alumnus, Bueno Silva shared his God-given talents with the sons and daughters of Gen. Paulino Santos by donating this magnificent portrait of the General after whom our beloved city had been named. A famous artist who now resides in Chicago, Illinois, Bueno has been honored by the Philippine Government as one of the best in his profession. He has been commissioned to paint portraits of famous people not the least of which was the former U.S. President Ronald Reagan.

In honor of his beloved Alma Mater, Notre Dame of Dadiangas, he donated this portrait of Gen. Paulino Santos to the Museum located in the campus of Notre Dame of Dadiangas College. Bueno describes the piece of art in his email: "The size of the canvas is 36" x 46" plus 7" around the frame, which makes the total size of 60" x 50". It was sent by airfreight and it is expected to arrive in Gen. Santos City by the 18th of this month to be received by Bro. Wilfredo E. Lubrico, FMS, President of Notre Dame of Dadiangas College." The Unveiling Celebration will be held on the 27th of February to coincide with the Foundation Day of our city. Regrettably, the artist that most of his friends know as "Jun" (a.k.a. Eulalio Silva Jr.) will not be able to attend the grand celebration. When you are in Gen. Santos City, we invite you to visit the Museum at the campus of NDDC and don't forget to view this work of art, work of love. Visit http://www.philtime-usa.com/buenosilva.html for more about Mr. Silva.

02.10.03 Silva paints General Santos' Soul
General Paulino Santos' portrait by internationally renowned portrait artist Bueno Silva, continues to illustrate Silva's skill in reaching below the exterior physical surface. He meets the challenges of recording General Santos' appearances, a view that identifies and recognizes the General. This distinguishing icon, though successfully achieved, serves as an essential guide for those of us who are unfamiliar with General Santos' facial characteristics. We not only witness the General Santos' outward guise, but we can imagine his compassion and see his quiet and determined gaze.

Silva's portrait leads us beneath the painted surface to a place where General's spirit resides. Silva paints General Santos' soul and brings it home to a rightful city that bears his name and to a museum that will keep his legacy alive.

December 2002 SunStar.com reported on the launch of NDDC's Golden Anniversary. The full text of the story is available at www.sunstar.com.ph/static/gen/2002/12/21/life/nddc.launches.golden.anniversary.html

The 7.6 magnitude quake occurred about 620 miles south-southeast of the capital, Manila, at 5:16 a.m.

There were no reports of damage or casualties, but the NEIC said the earthquake may have caused damage due to its location and size.
Copyright ? 2002 United Press International

Ray Powell reports that he has moved to GenSan with his wife Hearty. Ray is pictured here with Bro. Willy in front of the new pavillion. Ray also reports that he is starting up the new Anthropology department. Well done Ray!

Got News? Send it in! Email us at Info@NotreDameGenSan.Org